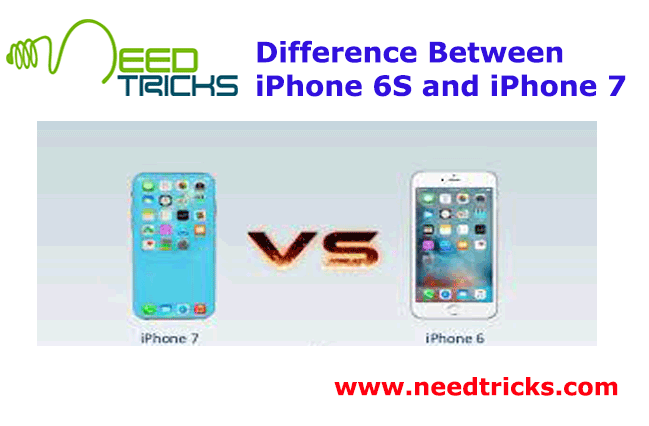 Difference Between iPhone 6S and iPhone 7

There are no much Difference Between iPhone 6S and iPhone 7 but there is a huge difference in pricing. Is it worth a upgrade or is it okay to buy iPhone 6S, These are common queries we get. I have listed down the main difference you should know between both of the iPhones. Reading this post will help you in making a decision.

Apple announced the next generation of its iPhones at an event in San Francisco on 7 September. Despite some rumours suggesting otherwise, the two new handsets are being called the iPhone 7 and iPhone 7 Plus, following the traditional naming cycle. Plenty of rumours did the rounds over the few months prior to launch, but we now have all the official details. Here is how the iPhone 7 compares to the iPhone 6S and the iPhone 6. There’s no avoiding the most obvious external design change between the iPhone 7 and iPhone 6S: the removal of the headphone jack. Yes, Apple has done the unthinkable (though predictable), citing “courage” to advance standards and advising users switch to wireless headphones if they want to be able to listen to music and charge the iPhone 7 at the same time. Understandably the move will polarize users, especially with no wireless or quick charging to make scenario this less painful. Apple will include a 3.5mm to Lightning adapter in the iPhone 7 box, but for some this risky change will prove to be a deal breaker.

The other potential deal breaker is Apple has done almost nothing to change the external design of the iPhone now for three generations and physically the iPhone 7 and iPhone 6S (and iPhone 6) are almost identical:

Where the iPhone 7 has improved, however, is its durability as it retains the same tough Series 7000 aluminium as the iPhone 6S but also adds IP67 dust and water resistance which allows the phone to survive being fully submerged in water for up to 30 minutes. Yes, it’s a catch-up feature to rivals but a good one. Even now some benchmarks claim the 2015 iPhone 6S is faster than Android’s 2016 flagships, but that hasn’t stopped Apple giving the iPhone 7 another significant speed boost:

Apple has yet to detail the iPhone 7’s exact CPU and GPU models and clock speeds, but it claims the range’s first ever quad core processor delivers 40% and 50% performance gains respectively over the iPhone 6S. The iPhone 6S is still blisteringly quick, so this may not be a huge selling point though it does promise a great deal of future proofing. Some power users will decry the lack of a RAM upgrade, but it just doesn’t seem like iOS needs more right now.

More subtly, the iPhone 7 also provides a 50% boost to 4G speeds with a 300Mbit modem switched out for a 450Mbit unit (how often you get to test this in real life remains to be seen). Apple made no claims of improving Touch ID this year but again, it’s not necessary.

Despite changing the smartphone industry with its Retina Display on the iPhone 4 in 2010, Apple has since been surpassed by rivals producing 1080p, 2K and even 4K OLED displays. But yet again Apple has stuck to its guns:

LED and 750p is undoubtedly getting long in the tooth, but Apple has boosted peak brightness on the iPhone 7 by 25%, introduced support for a wider (P3) colour gamut and better color management. All of which sees Apple declare the iPhone 7 to have a “cinema standard” display, but no this won’t match up to the OLEDs on Samsung’s Galaxy S7, S7 Edge and Note 7.

Meanwhile 3D Touch support is still there, even if its implementation in iOS 10 remains hit and miss as users are forced to guess which interface elements are enabled and which are not.

For the last two years Samsung has been the smartphone photography king, but the new iPhone 7 makes some very welcome changes after the iPhone 6S plateaued from the iPhone 6:

The numbers to look for here are the significantly larger f/1.8 aperture, optical image stabilisation and a four LED flash with cool and warm tones, all of which should improve the iPhone’s biggest photographic weakness: low light photography.In addition to this Apple has fitted the iPhone 7 with an all new 6-element lens, upgraded image signal processor and added support for wide colour capture which will boost colour accuracy. Meanwhile the front facing camera gets a bump to 7MP and, while still stuck at f/2.2, it delivers greater detail and 1080p video.
Of course the star of the show, however, is the iPhone 7 Plus and its dual rear cameras which provide 2x optical zoom and a much wider depth of field. But it remains extremely bulky for a 5.5-inch phone.

Hope this article has helped you to learn the Difference Between iPhone 6S and iPhone 7, Please Comment, Like and Share our blogs to keep us writing.

22 Things You Didn’t Know About Nintendo