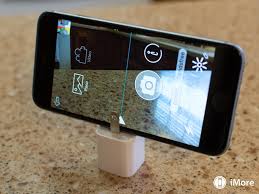 First of all, before you even take the panoramic photo with Cycloramic, youll need to get the new Cycloramic app that works with the iPhone 6. It costs $1.99 in the iTunes App Store, and if youre whining about having to pay for a newer version of the app, blame it on Apple.