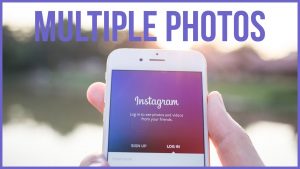 Instagram (commonly abbreviated to IG or Insta) is an American photo and video sharing social networking service owned by Facebook, created by Kevin Systrom and Mike Krieger and originally launched on iOS in October 2010. The Android version was released in April 2012, followed by a feature-limited desktop interface in November 2012, a Fire OS app in June 2014, and an app for Windows 10 in October 2016. The app allows users to upload media that can be edited with filters and organized by hashtags and geographical tagging.

Step 1:
In the main Instagram feed screen, tap the + icon.

Step 2:
Tap Library, in the lower-left corner of the screen. The most recent photo in your Camera Roll (or Gallery) appears in the viewer.

Step 3:
Swipe in the thumbnail photos, and then tap the first photo you want to add.

Step 5: (Upload Multiple Photos to One Post on Instagram)
Tap another thumbnail. The photo appears in the viewer, and a number 2 appears next to the thumbnail. That number shows you the order in which your followers will see the photos in your post.

Step 6:
Continue tapping thumbnails as needed. Here, three photos are chosen. The numbers reflect the order in which the photos were selected.

Note:
If you select a photo but then decide that you don’t want to include it, just tap the thumbnail photo. The order of your photos will change if you selected more than two photos. To deselect all photos, tap the blue select multiple icon in the lower-right corner of the viewer. (Upload Multiple Photos to One Post on Instagram)

How to Get Noticed by Recruiters on LinkedIn